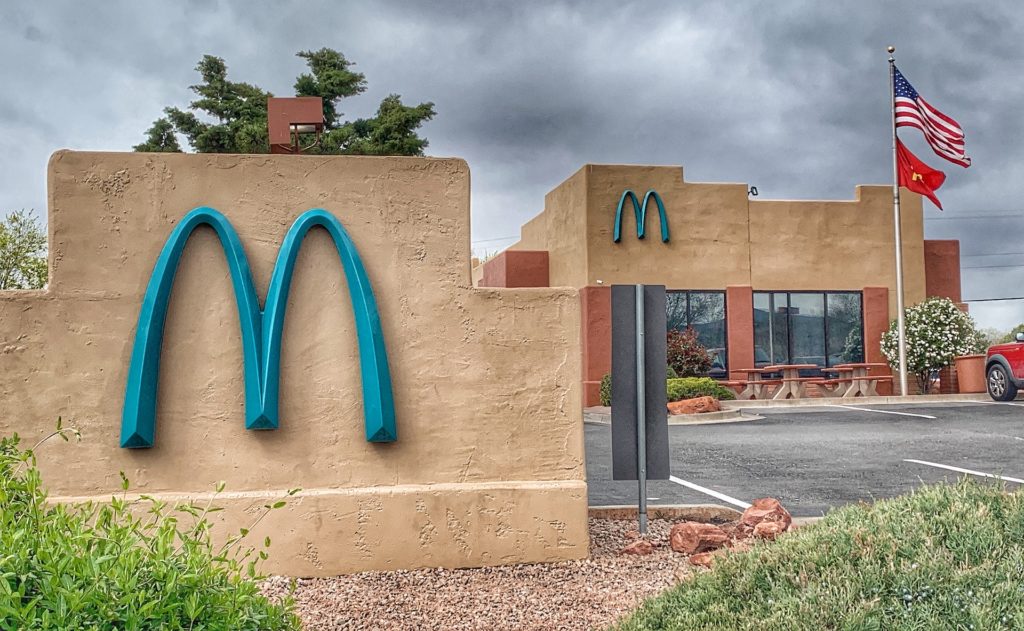 Sedona, Arizona is a picturesque town founded on the twin principles of aesthetic beauty and unbridled commerce. Two major roads lead into the area; one from the north that snakes through the hairpin turns of Oak Creek Canyon, and one from the south that favors the flatter terrain of the desert. When we visited Sedona several years ago, we decided to enter using the southern route as we didn’t want to risk the unfamiliar turns of the canyon in the approaching darkness.

We couldn’t miss the sign as we neared the outskirts. “The Only Teal Green Arches in the World!” The Sedona McDonalds has teal green arches? What an advertising coup! We had to check this out come the morning.

The next day, sure enough, there was the McDonalds restaurant, clad in adobe and sporting very fashionable arches in a gorgeous green teal. It looked like it belonged in this community where everything seemed to be color-coordinated to fit a southwestern theme.

While talking with the locals a different story emerged. It seems that McDonalds, that corporate giant of fast food, swept into Sedona several years back to plant their world-renowned image in this tourist Mecca. They planned to stand out from the competition with their trademark red-and-gold color scheme attracting the attention of children and their obliging parents. The opposition came as a complete surprise.

Sedona, it turns out, has a very strict zoning ordinance. Those mellow combinations of tans and yellows and teals that you see everywhere? It’s a mandate, not a happy accident. Everyone must conform to the approved color scheme. Even a swaggering juggernaut like McDonalds.

McDonalds didn’t knuckle under without a fight. They battled the zoning board in court, seeking relief from this “ridiculous burden” on their business. And lost. If a McDonalds restaurant was going to grace the streets of Sedona, the famous arches were not going to be gold.

Ultimately someone realized that instead of being defeated, McDonalds was teetering on the edge of a great opportunity. If they couldn’t be like all of the other thousands of McDonalds, they would be unique! How many McDonalds restaurant arches do you take pictures of while you are on vacation?

So the marketing campaign to advertise the world’s only teal green arches was born – as if McDonalds had thought up the idea themselves in the first place.

There’s a wonderful lesson lurking here. How often do we encounter adversity in our lives, something that at first glance seems to block our progress and makes our lives more difficult?

Why can’t we embrace the situation and look for ways to turn it into an opportunity? Many of the world’s great inventions were products born of looking for ways to solve a problem. It was the noted Greek philosopher Plato who said “Necessity is the mother of invention.”

The next time you run up against the unexpected and the unwanted, take time to figure out how to make that boulder into a stepping-stone. It’s your happiness at stake. Look for the teal green arches in your life.