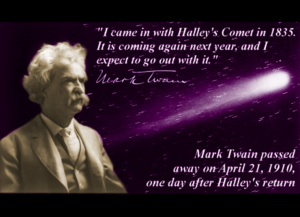 When our youngest daughter was ten years old, we finally relented in the face of her daily requests and got her a puppy. We went to a breeder and bought a pedigree Pembroke Welsh Corgi (the variation that has no tail).

She wanted to name the furball “Comet”, but when we went to pick him up we were informed of the etiquette of pedigree breeds. You can’t just pick any old name for your pedigree mutt; strict rules must be followed.

In our case, since the father’s name began with the letter “H”, every pup’s name in his bloodline had to likewise begin with the letter “H”, at least for the official name entered into the records. We could call our dog anything we wanted at home, except, as it turned out, late for dinner. (But that’s another story.)

Problem solved! Our puppy received the official name “Halley’s Comet” for the pedigree posterity, and the shortened “Comet” for everyday. His markings eliminated him from serious show events, which was fine with us as we only wanted a dog as a pet.

Once we got the little fella home we discovered a couple of things. You know the old adage: “The world’s slowest dog is faster than the world’s fastest man”? Truth. Even on those short stubby legs, the little puppy was greased lightning in the back yard.

Second, the poor little guy initially had an issue with flatulence. We trusted that would pass with time. (Yes, I know, that pun stank worse than the puppy.)

To sum it up, we figured we had picked the perfect name for Comet after all. For what else is a comet than a fast-moving object that streams a trail of gas behind it?